Showing posts from March, 2011
Show all

Do the following 1000 hammering tasks, and you will have learned how to use a hammer the hard way. You can do them from your bedroom. These are just like these guitar tasks that I do - in my spare time as a rock star. Well not really a rock star... but I sure can do some awesome guitar solos. They're also like katas I practice for my martial arts... in my spare time as a ninja.

"pssst..." "the world doesn't like guitar solos any more - and playing in your bedroom will never be like playing to real people. Also martial arts practitioners who use katas loose to fighters who practice fighting in real fights."


This pay out brought to you by the awesome Programming, Motherfuckers manifesto.
Post a Comment
Read more

Hacking on android and pygame. 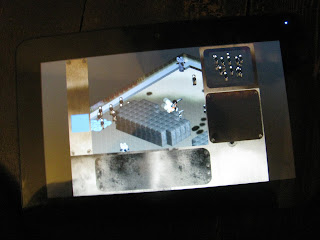 For the last couple of weeks I've been hacking on my new android tablet in my spare time.

It's one of those cheap 25cm ones (10 inches). Dual core, nvidia graphics, and all of that stuff. Not a bad little device really.

One project has been to port an old game of mine to it using PyGame subset for android(pgs4a). It's a package of a subset of the pygame modules - along with a bundled port of CPython for android. You can either package your apps standalone, or simply install the launcher from the android market, then upload your game to your SD card. Simples.

So far it's been pretty fun, and the other weekend I got something running. Next up is to work on the UI parts. Already it supports keyboard, mouse, mouse+keyboard, and also joystick mode. However, none of them really work with the touch screen on my tablet. I'm not a very big fan of the touch joypad approach. Where they make a virtual joypad on each side of the screen to touch. There are two main actio…
2 comments
Read more
More posts