Showing posts from April, 2011
Show all

Hotmail, xbox and microsoft live have been hacked.

- April 29, 2011
update: hotmail have added a my friend has been hacked button, so people can report when one of their friends accounts have been hacked. Also I got my account back after 5 days or so. I don't think any of my contacts lost any money from the scam. Other people who got their accounts hijacked have not been so lucky.


Many people have been having their hotmail accounts been broken into and stolen.

Microsoft writes about it on their security blog.

I've meet a few people over the last week who know of people who have had their accounts stolen.

The fraudsters are sending everyone in their contact list and telling people they have been robbed - and to send money. They say they are in a hotel and the hotel will not let them leave.

A friend told me about how some people call up, and someone answers pretending to be the hotel manager mentioned in the scam email.


I haven't read any media coverage of this, but have heard first hand of people who it has happened to. Could this be related …
2 comments
Read more 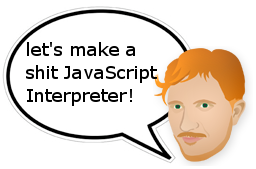 Let's make a shit javascript interpreter! Part two. As a learning exercise, I've begun writing a JavaScriptECMAScript interpreter in python. It doesn't even really exist yet, and when it does it will run really slowly, and not support all js features.

Homework from part One - A simple tokeniser.We ended "Let's make a shit JavaScript interpreter! Part One." by setting some homework to create a tokeniser for simple expressions like "1 + 2 * 4". Two readers sent in their versions of the tokenisers (ps, put a link to your home work results from Part One in the comments, and I'll link to it here). http://pastebin.com/P0sXjr65http://gist.github.com/460197

Find out more about PyWeek - "Invites entrants to write a game in one week from scratch either as an individual or in a team. Is intended to be challenging and fun. Will hopefully increase the public body of game tools code and expertise. Will let a lot of people actually finish a game. May inspire new projects (with ready made teams!)"
Post a Comment
Read more
More posts