TLDR; less performance spikes, faster average performance, PyPy is a good Python for games and multimedia apps on desktop systems, running GC in a thread is a good idea for GIL releasing apps.


In March 2018 at the PyPy winter sprint I spent some days working on improving pygame support on PyPy. Part of this was investigating pypy frame drop. In there I found PyPy had both lower average performance in this pygame-using-CPython-API benchmark, and had spikes which caused frame drops. Remember that in latency sensitive applications performance spikes are not allowed. Note that not very much of this code is pure python (where PyPy is fastest), so it's almost a worst case benchmark for PyPy performance.

Thanks to Antonio, the PyPy team and their supporters — things have much improved since then. One improvement in particular is that PyPy now allows more control of when the Garbage Collection does its work. Read more about it in the blog post "PyPy for low latency systems".

Running garbage collection in a thread.

Now that we can call garbage collection when we want, how about we do it when we release the GIL and do some other processing in C? PyPy doesn't run the garbage collector in a thread by default, but we can do that ourselves.

Remember that python has a GIL that can be released when you want to do IO or CPU intensive work. Here is an example program which has a thread waiting to be told when to run the incremental garbage collection step.

This is how the program executes. Notice how it does display.flip and waits on the OS to do VSYNC at some refresh rate (usually 60FPS). In this spot many games and multimedia apps have some spare time to do other work.

Waiting for VSYNC is the perfect spot to do GC!


Trace of program execution when doing GC in background thread.

Running garbage collection in a thread should be able to improve the performance on pypy of many apps which wait on the GIL.


Our performance goal is very little variance between frames and no spikes above 0.013. 0.013 is about the amount of time we have to do our work before we ask the frame to be flipped at 60 times per second. 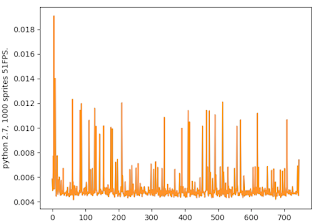 So we have something to compare against, here is a measurement of Python 2.7.

Note various spikes in performance, 51 FPS on average with many frames falling in the 0.005 to 0.007 range (below the required 0.013). The the funny spike at the start. I'm not sure why this is happening now compared to when I measured last year. The underlying OS has changed, or perhaps some other software is running on my computer.

Remember: Our performance goal is very little variance between frames and no spikes above 0.013. 0.013 is about the amount of time we have to do our work before we ask the frame to be flipped.

Python 2.7 isn't that bad here. It doesn't spike over 0.013 but it does have quite a lot of variance in some frames. 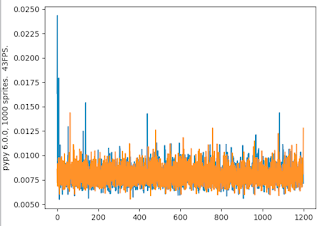 What about PyPy 6.0.0 which came out some months after my experiments last year. Here we see 0.005 to 0.010 with some spikes of around 0.0125 and higher. This older version of PyPy fails the performance goal. 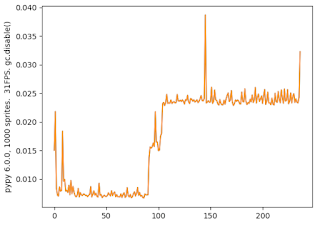 What if we just disable the garbage collector entirely? (Apart from memory growing until the program starts swapping or crashes). After a few seconds it just starts to slow down a lot. 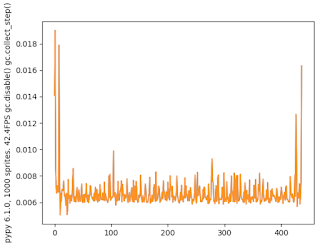 This is using gc.disable() at the top of the main loop, and calling the new gc.collect_step() just before display.flip when most of the work has been done already. Remember that display.flip releases the GIL and waits for VSYNC at 60FPS.

Here we see the average FPS at around 42 with times mostly between 0.006 and 0.008. At the beginning and end there are some spikes. But mostly things stay below the magical 0.015 seconds required to get below 60 FPS. Here is another measurement. 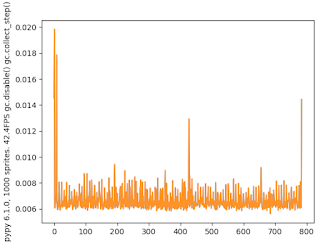 With this second measurement we see that something is going on at the start and at the end again.  Again, mostly there are few spikes above 0.015 and things mostly stay between 0.006 and 0.008. This capture does show one spike, but I found this hard to reproduce.

This is a great improvement over CPython in all except average FPS. The timings in the graphs are the work that is done before display.flip is called. 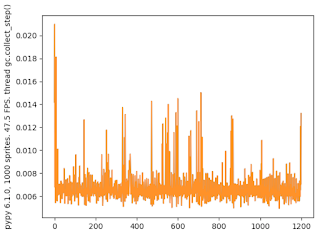 Why are these spikes here? I'm not sure. It needs to be investigated some more.
I ran the benchmark a few more times, and it seemed to spike less. 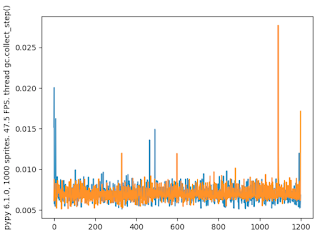 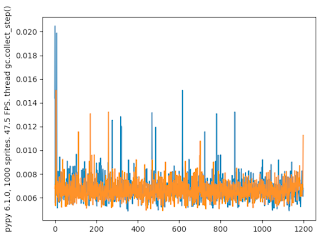 Here's the example using Event instead of Queue.

Also, you can find the pypy-bench-testsprite.py in a gist. It needs to be run within the pygame examples folder.

The results that Antonio posted in "PyPy for low latency systems" also appear in the experiments I made. Worst case performance can be increased, and the performance spikes can be removed.

PyPy meets the performance goals for games now if you disable the gc at the top of the main loop, and call the gc collection every frame. The spikes that were there before are gone. The variance in performance is actually less than CPython.

Calling GC in a thread is a viable option which increases the average FPS very close to CPython levels. However some more work needs to be done to try and find a way that avoids the increased performance jitter. Note, that this jitter is still at acceptable levels.

Running the GC in a thread can probably be used for a peak performance increase by many apps  which release the GIL for IO or CPU intensive operations.

I'd like to remind people that this benchmark is a worst case for PyPy and games. In that there is also CPython API used rather than CFFI(fasted ffi on PyPy), and the benchmark contained not much pure python code. If you were also doing physics, collision detection and other stuff in pure python PyPy would pull ahead. Also this was using pygame with SDL1 so that I could sort-of compare performance to the previous time. Pygame 2 with SDL2 runs this benchmark much faster because of hardware acceleration. Another reminder that PyPy 6.1.0 isn't released yet, so the results will differ compared to the nightly version.

The combination of PyPy's JIT with the Cython ahead of time compiler makes a formidable combination. I'm looking forward to using them all with the hardware acceleration that pygame 2 provides (Vulkan, Metal, OpenGL, Direct3d, ...).
gc pygame pypy python threads

Selectmytutor said…
These are truly great ideas in concerning blogging!
You have put some fantastic factors here. Any way keep up writing!
Private Tutors

So, I started writing this for people who want to 'contribute' to Community projects, and also Free Libre or Open source projects. Maybe you'd like to get involved, but are unsure of where to begin? Follow along with this tutorial, and peek at the end in the "what is a git for?" section for explanations of what some of the words mean. Draft 1, 2018/07/18 - initial draft. Draft 2, 2019/11/04 - two full unit test examples, assertions, making a pull request, use python 3 unittest substring search, "good first issue" is a thing now. Started "What is a git for? Jargon" section. Draft 3, 2020/12/12 - default branch name is main. What's first? A test is first. A unit test is a piece of code which tests one thing works well in isolation from other parts of software. In this guide, I'm going to explain how to write one using the standard python unittest module, for the pygame game library. You can apply this advice to most python pr
Read more 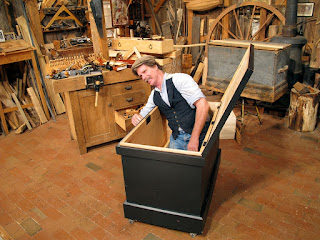 tldr; you can do jobs, queues, real time change feeds, time series, object store, document store, full text search with PostgreSQL. How to, pros/cons, rough performance and complexity levels are all discussed. Many sources and relevant documentation is linked to. Your database is first. But can PostgreSQL be second? Web/app projects these days often have many distributed parts. It's not uncommon for groups to use the right tool for the job. The right tools are often something like the choice below. Redis for queuing, and caching. Elastic Search for searching, and log stash. Influxdb or RRD for timeseries. S3 for an object store. PostgreSQL for relational data with constraints, and validation via schemas. Celery for job queues. Kafka for a buffer of queues or stream processing. Exception logging with PostgreSQL (perhaps using Sentry) KDB for low latency analytics on your column oriented data. Mongo/ZODB for storing documents JSON (or mangodb for /dev/null replacemen
Read more 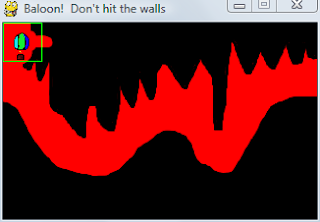 "BULLSHIT! That bullet didn't even hit me!" they cried as the space ship starts to play the destruction animation, and Player 1 life counter drops by one. Similar cries of BULLSHIT! are heard all over the world as thousands of people lose an imaginary life to imperfect collision detection every day. Do you want random people on the internet to cry bullshit at your game? Well do ya punk? Bounding boxes are used by many games to detect if two things collide. Either a rectangle, a circle, a box or a sphere are used as a crude way to check if two things collide. However for many games that just isn't enough. Players can see that something didn't collide, so they are going to be crying foul if you just use bounding boxes. Pygame added fast and easy pixel perfect collision detection. So no more bullshit collisions ok? Code to go along with this article can be found here ( https://github.com/illume/pixel_perfect_collision ). Why rectangles aren
Read more